The IEEE 802.3bt standard’s impact on the expanding PoE marketplace

The need exists for dependable certification of standard-compliant 802.3bt products.

IEEE 802.3bt, IEEE Standard for Ethernet – Amendment 2: Power over Ethernet over 4 Pairs, achieves the increase in maximum power by using all four pairs in the specified structured wiring plant, and a combination of inventive features such as “Autoclass” and “Short MPS” deliver the improvements inefficiency.

This chart shows the requesting and sourcing power for all eight Classes specified in the IEEE 802.3bt standard.

Together, the standard’s advancements represent a substantial enhancement to the capabilities of Ethernet with standardized power. And with the expansion of support for Ethernet data speeds—i.e. 2.5, 5, and 10 Gigabits per second—IEEE 802.3bt figures to spur a new surge in Power over Ethernet applicationgrowth.

IEEE 802.3 standards have gradually been refined to increase the usefulness of PoE, the standardized power overlay to Ethernet data communications. Among the key terms to understand in PoE are “PSE” for “power sourcing equipment” such as a switch or hub, “PD” for “powered device” such as an end station, “Class,” and “Type.”

Ethernet devices capable of receiving power (PDs) are detected by devices capable of sourcing power (PSEs). The Class, numbered 1-8, represents a certain amount of power. A PD requests a Class of power, and the PSE assigns the Class depending on various events, allowing for provision of granular power levels and minimizing power waste. The Class information exchanged during this negotiation also informs PoE’s power-management capability. Additional fine-grain power levels can be communicated using the Ethernet data Link Layer Discovery Protocol (LLDP), for even greater energyefficiency.

Both IEEE 802.3af and IEEE 802.3at were intentionally limited to only two-pair power (and were expressly prohibited to operate simultaneously over all four pairs), so the enhancements in IEEE 802.3bt have been eagerly anticipated by the PoEmarket.

The efficiency gains for Classes 1-4 are significant in terms of potential reduction in power costs. The shift to four-pair PoE results in power loss along a Category 5 Ethernet cable being about halved in IEEE 802.3bt.

IEEE 802.3bt also defines a modification of the Maintain Power Signature (MPS)—the minimum current a PD must draw to avoid being turned off by the PSE. MPS is the PoE “sleep mode.” “Short MPS” reduces the duty cycle and how long a power signature must be generated to maintain a power connection. This modification improves the minimum standby power by a factor of between 10 and 20. With a PD in Short MPS, which all Type 3 and Type 4 PSE are required to support, at least 20 milliwatts (mW) must be drawn to avoidshutdown.

“Autoclass” is another key new feature with IEEE 802.3bt, allowing for optimization of the power budget by allowing the PSE to measure the actual power draw with a PD in a known maximum power draw state. This measurement can then be used to determine the PD power budget, taking all system parameters into account. Autoclass can be triggered by either physical-layer or data-link-layer classification and allows the PSE to allocate a more precise amount of power needed by the PD, including the cable loss and agingmargin. 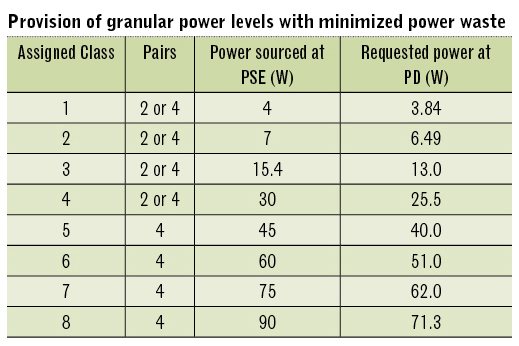 Other new features with IEEE 802.3bt include thefollowing.

Accommodating a diversity of application spaces

Backward-compatibility is not sacrificed for IEEE 802.3bt’s big advances. The new Types of devices defined in the standard must work with the Types previously standardized in IEEE 802.3af and IEEE 802.3at. So, while the application horizon for PoE is expanding, with IEEE 802.3bt supporting new markets not previously accessible for the technology, the new standard also does not limit innovation in legacyspaces.

Consequently, high-powered PoE products are already on their way to the marketplace. There are emerging applications such as network-attached storage, building automation, LED lighting, and access control, as well as an avalanche of new features coming to traditional end equipment (IEEE 802.11ax, forexample).

Because various options have been put in to address multiple applications in IEEE 802.3bt, a potential exists for interoperability problems with some implementations. A certification program is key to identifying devices that correctly implement the standard and will work with oneanother.

Ethernet Alliance Gen 2 PoE certification is in development, based on IEEE 802.3bt, to provide confidence that certified PoE devices of every Type will interoperate when connected together. Ethernet Alliance PoE certifications improve user experience by minimizing interoperability issues and market confusion. Users can easily identify products that will work together, either via the EA Certified Mark or the online registry listing of certified products. The Ethernet Alliance logo indicates that a product has been validated. When the PSE class is greater than or equal to the PD class (as in the illustration), users can see that the PSE will fully power thePD.

The benefits are far-reaching: creation of an ecosystem of PoE products that have been tested against the Ethernet Alliance PoE Certification Test Plan; reduced support issues and associated costs for vendors; and, most importantly, an expanded, more confident user base in the reliability and verifiable interoperability of innovative PoEproducts.